The seeds have arrived. The plans are drawn up. And last week the first stage of the 2019 garden season began. I started seeds! I knew how many plants I wanted this year, so I made my list, and selected things for early starting that I knew needed to be started indoors, or were something I may have had a problem with in the past. My secret weapon this year is heat mats. I should have used them last year, but I thought my basement was warm enough and boy was I wrong.

So this year I ordered some off Amazon. I planted a week ago, and what a difference. I already have seedlings. If you were considerering using them, I would highly recommend it. They don’t cost much and the results I saw speak for themselves. Before I get into what already sprouted, here is what I started:

Seems like a lot doesn’t it? But I only planted 3 cells of most of those. I scaled it back based on my notes from last year. There is still an entire group that will be sowed outdoors in May, such as Sweet Corn, squash, beans, basically the easy fast germinating stuff. This year, because I ordered seeds, potatoes and some plants, the order is staggered. The seeds came about 10 days ago. I expect the tubers next, then the plants (raspberries and a fig), and last will be the sweet potato slips.

Right now I have sprouts on the kale, chard, brussel sprouts, tomatoes and cucumbers. So I am looking for a cheap source of small plastic pots to transplant them into. They will develop better i pots then left in the starter cells, even though I use deep cells.

My enthusiasm seems to grow along with them. One thing I did notice is that the heat mats require more frequent watering. Not a lot, but noticeably more than last year. I am okay with that. I tend to it all daily, like an impatient, hovering parent. I expect in another 10-14 days, maybe a little less, I will start seeing peppers. Peppers were a hard spot last year. It took a log time because my basement was so cool. The plants were small when I moved them outside, and were stunted for the season. This year I am hoping for bigger plats, for a bigger yield. . 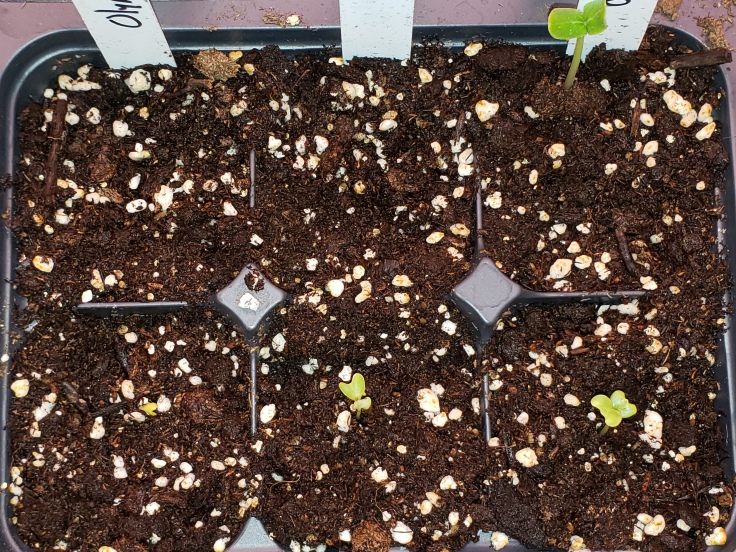 So I am pleased that things are moving along. The warmer weather makes me impatient to get out there, so having something to do is a nice distraction. The snow is gone, the finches are changing colors, and in the mornings when I leave for work, I can hear birdsong. Now is also when I also start stocking up on supplies such as: fertilizer, copper fungicide for the squash, melons and cucumbers,  Epsom salts and calcium. I mix Epsom salts and calcium and give the beds with the peppers and tomatoes a good shot of that. That helps prevent blossom end rot and a number of other deficiencies they are prone to.  My raised bed soil is deficient in micro nutrients and last year I didn’t use nearly enough. I ended up having to foliar feed to treat symptoms and I would rather stay ahead of this time and have improved plant health in order to see increased yields.

That’s all I have to cover for now. In a few weeks I may update again, if some meaningful change has occurred. Until then, play for warmth.